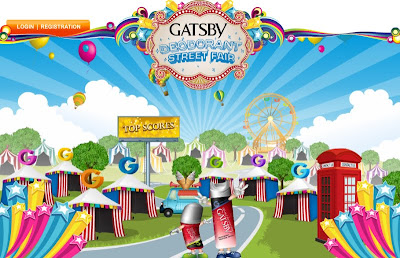 Since I can bring a friend with me, I invited YHsin, who invited me to an event - I'm A Standout In Life - organized by Nuffang and Tiger Beer on the 6th of June 2009.
YHsin blogged about the event BUT he didn't enable archiving in his blog and I really didn't want to hunt for the entry page by page so .. the blame's on him! :)
We reached Imbi Monorail pretty early. None of us knew how long the journey would be so we left Tmn Bahagia LRT at 0835 hours. Damn early or what. Both noob.
But we wasted a good 5 minutes or so searching for a sign showing "Berjaya Times Square" because none of us knew Times Square was attached to the monorail station. Memang noob -_- A little boy playing with a DSLR. Envious. I also want!
All bloggers had to change into the given t-shirt, which, the smallest size was a lil too big for me it made my outfit looked baggy. 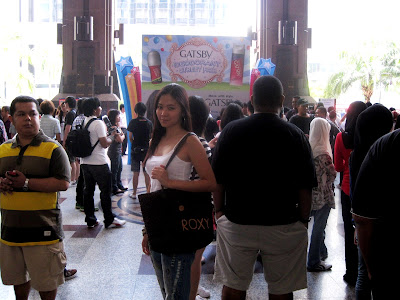 Here's a pic before I changed. 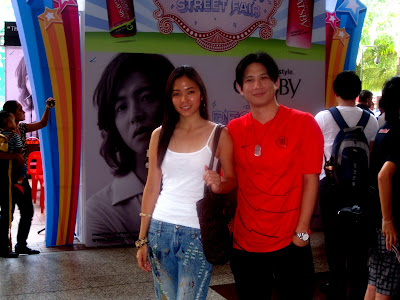 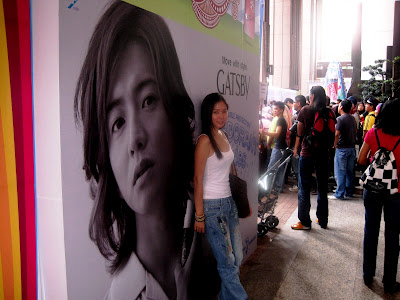 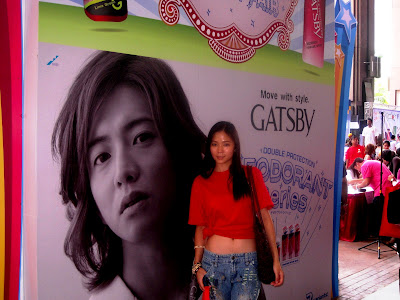 And here's a pic after I changed. See, I improvised on the way I wear the it. Better kan? :) 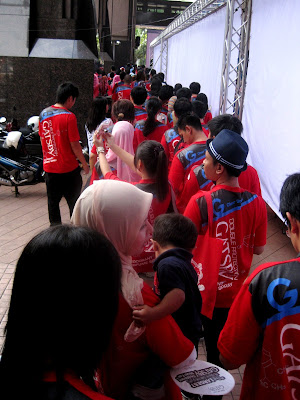 The bloggers, myself and YHsin included, on our way for a group photoshoot, which was aimed to set a record in the Malaysia Book of Records for the Largest Gathering of Bloggers. 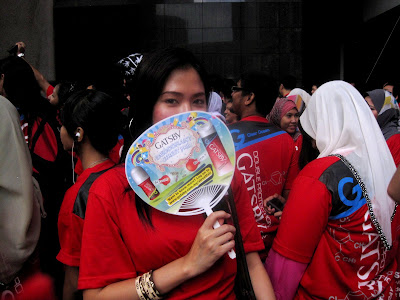 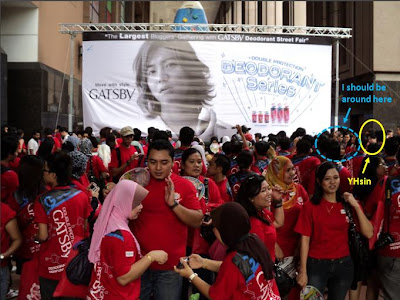 Picture courtesy of a blogger, Aidi Safuan.
Apparently, the final number of bloggers who participated in this attempt was 518, and a record was set! 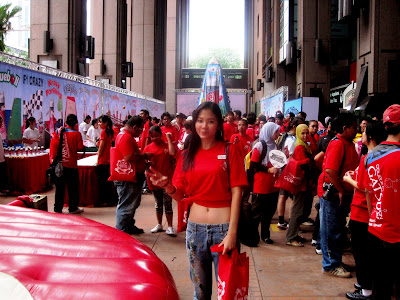 So, what exactly were we doing there? We were there .. to play games! 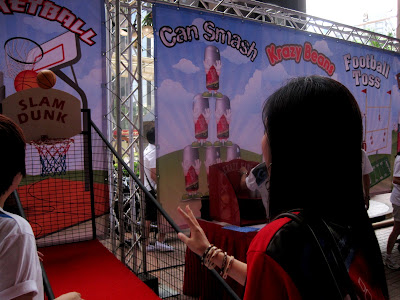 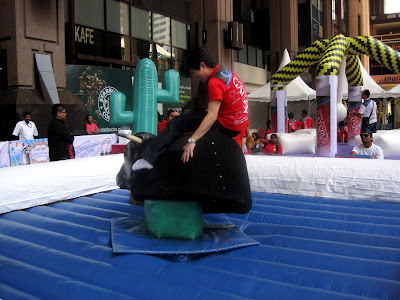 Bull-fight (or whatever it was called) 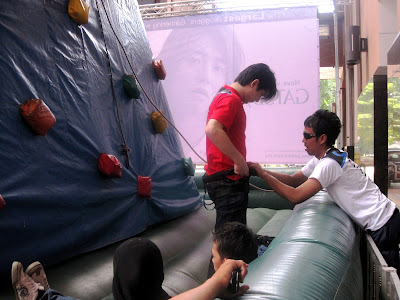 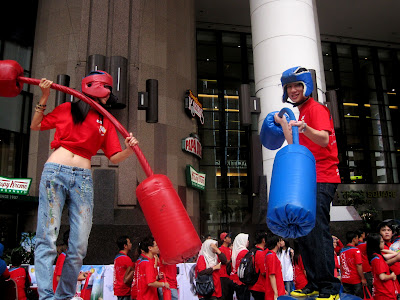 This was the most interesting game, to me. We had to topple each other to win points. Guess who was the last man standing?
.
..
... 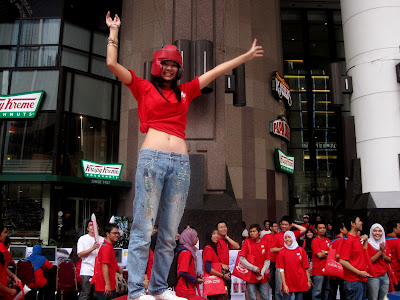 ME!! :D Too happy ady I looked damn sohai here.
The trick was not to tire yourself out by swinging and whacking the ballooned weapon at the opponent, but to poke at the his/her midsection, causing imbalance and poke again and again AND AGAIN to win the game!
YAY I MANAGED TO TOPPLE A GUY!! :):):) 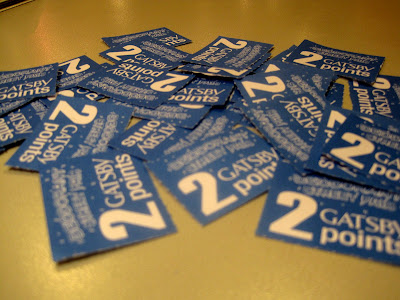 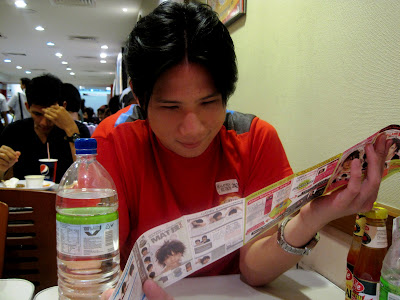 Him, plotting an evil plan on how to be more vain than he already is, with the newly acquired hair products. 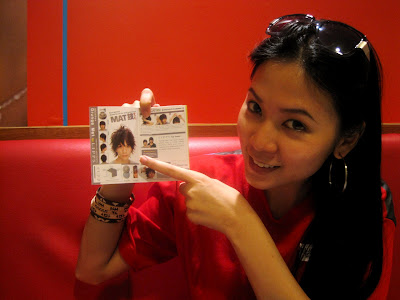 Me, admiring one of the guy models. 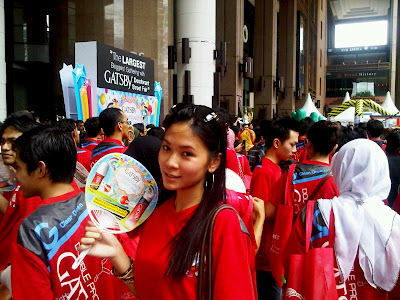 The one motivation which made us camped at Times Square for 9 hours - LUCKY DRAW. Among the prizes to be won were Blackberry Bold 9700, Canon Ixus camera and Acer lappie.
YHsin targeted the BB/lappie/hard disk while I targeted the lappie/camera but .. guess we weren't lucky that day, unlike this lucky dude, Aidi Safuan, who won a BB Bold 9700 :( 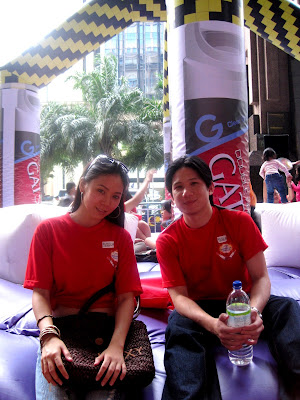 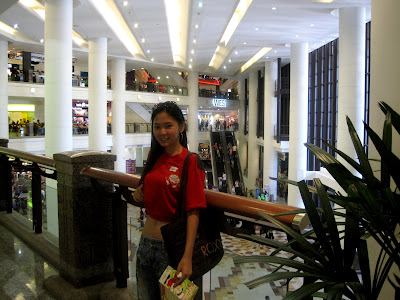 But I know I had fun, although my feet's killing me from all the standing and walking and hardly any resting. Too addicted to the games ady. LoL.

so nice you get to go.. living out of KL is a disadvantage for me =)

uik..u went to Standout last year? interesting..
and it's kinda funneh how u wore ur red t-shirt like that =P

miss out the event due to travel... next time then

Having final so I can't go.

kenwooi: haha where are u now?

jenkin: haha yeah i attended the standout event last year. i blogged about it but was too lazy to continue with the second half of it. hehe http://erica-t.blogspot.com/2009/06/nuffnang-tigers-standout-party-pt-1.html

everyone, it was a great event. to those who missed it, it's okay. nuffnang comes out with fun stuff every now and then!

you were definetly one of the stand out participant during yesterday's event, that I remembered seeing

hehe,I bet you had great fun yesterday ya. NN paid us to play and came home with freebies too =) its was awesome..

nice way of improvising ur shirt!

plus u get to show ur flat belly!! =p

budleee: haha i think u appeared in the first pic of me (in this blog entry) by coincidence. right right?

aidi: of course u saw me. i was standing near d stage when u went up to claim ur prize. envious. hmph. lol.

sbdude: yeah, loads of fun. i bet everyone did, too! :D