The Sweetest Guy Ever

I recently finished a novel titled "Cause For Alarm", by Erica Spindler. Yes we shared the same first name, but that's not the point.

It caught my eye first, because the author's name's Erica, and second, the plot summary seemed catchy.

Kate and Richard have the perfect marriage - marred only by their inability to have a child. The adoption agency's call fulfills that dream .. and opens the door to a nightmare.

Julianna Starr has chosen Kate and Richard to be more than the parents of her child. For Richard is the man of her fantasies, the one she's been waiting for. Stalking the couple, Julianna moulds herself in Kate's image and insinuates herself into Richard's life, determined to tear their perfect marriage apart and have Richard for herself.

But for Kate and Richard, the nightmare has only begun. Because Julianna is not alone. From her dark past comes a man of unspeakable evil. Now no one is safe - not even the innocent child Kate and Richard call their own.

The highlight here is that Julianna, dubbed as the younger and more beautiful Kate, succeeded in breaking their 10-year perfect little marriage *shudder

I have been somewhat terrified of relationships and commitment after having gone through a really terrible one (I wouldn't call it a relationship but nevermind), which involved betrayal, distrust and hatred, although, it was partly my fault for not pulling the brakes when I knew it was wrong and all.

Then there was another short, negligible one (it was definitely a mistake) which I'm not gonna talk about since it didn't really cause an impact in my life.

When I began to give up on all these, he stepped into my life. He was always there for me since we met in uni but our paths somehow didn't cross. And it stayed that way for four long years.

I wasn't exactly ready to commit and I was hesitant in accepting his advances but his assurance eventually made me gave in (it took me a month to think it through) .. well, and also because I KIND OF liked him but a bit too egoistic to say it straight and then .. there was us ♥

But like any other relationships, there were ups and downs in ours as well. The one thing I fear and hated most was to be cheated. And this includes flirts and exchanging sweet words although there was nothing physical.

Maybe this was karma, since I was a pretty playful girl back in high school but again, that's not the point.

So here we are, crossing our 5th month (and 5 days) together and apart from the downside of things (just one), I could not have been happier :)

He is always away on job attachments but surprisingly that works out pretty well for the both of us. He once said (I can't remember the exact words used), "I'd rather you ask why didn't I look for you, than to ask why do I always look for you", which I couldn't help but to agree.

I do miss him, everyday, despite me constantly running around juggling my time between work, personal and leisure.

I just realized I got carried away lol. So anyway, I finished the novel yesterday night and I found myself feeling very restless and paranoid of .. everything! Basically whatever the future holds. I wouldn't wanna be in Kate's shoes. I wouldn't want to even know how it will hurt to catch your husband sleeping with another woman, red-handedly.

After tossing and turning for a good one hour or so, I emailed him and ended the mail with "You sayang kan?"

He did not reply the mail, instead, he waited (I'd like to assume so) for me to sign into gtalk so that he could give me all the assurance I needed, with lots of humour in it. He made me laugh and I felt stupid for being so paranoid of relationships and commitment when ..

I had found the sweetest (and cutest) guy ever :) 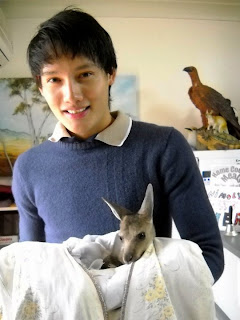 That's him, with a baby kangaroo :)

Email ThisBlogThis!Share to TwitterShare to FacebookShare to Pinterest
Labels: love and relationships

so shweeeet! and yr boyfriend is cute =)

this pic is the first time i see why a time ago a comment came up that says you two look alike :) based on this pic, i'd agree!

huh really? haha i'll take that as a compliment since i think he looks good in this pic :P