Brown, dressed in a white body-hugging dress is known as a R&B DJ.

“I don’t prefer any particular style. I like to mix it up with some dance music, some classics and a bit of rock. The track Sweet Child of Mine is a favourite with the crowd,” Brown said.

Her set at the Johnnie Walker Black Lounge Circuit party was a relatively small one compared with her impressive resume of being the sole support for Britney Spears’ Australian and European ‘Circus’ tour, playing at the Grammy’s after-party and also having her own twice-a-week spot on an Australian national radio. 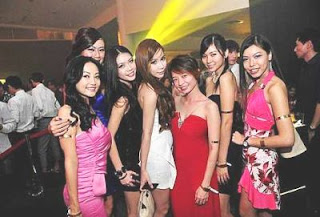 “There are different benefits to performing in front of a big crowd and a smaller one. I like big stages but intimate settings are more intense with a lot of energy,” Brown said, adding that as long as the crowd enjoyed her music she would enjoy it too.

Her hectic lifestyle sometimes only involved two hours of sleep before having to jet off to another location and do it all over again but she has no regrets.

This is not the first time Brown has performed at F1 parties.

“I do not know much about cars but I just like fast cars,” Brown said.

Resident DJ for The Butter Factory, Singaporean DJ Andrew T said it was not his first time playing in Malaysia.

“The people here are more into dance music some years back but just like in Singapore, the crowd is starting to get into hip hop sounds,” he said.

Andrew, who has been in the industry for eight years, said it had been a fine journey in his career.

Homegrown DJ Goldfish also rocked the 700-strong crowd including celebrities Reshmonu, Henry Golding and Chermaine Poo. The Black Circuit Lounge party was held at the Swedish Marque in Jalan Sungai Besi that was transformed into a sleek and classy lounge in the spirit of the Monaco race after-party.

This is the second event held this year. The first was in April after the F1 Malaysian Grand Prix followed by the pit crew experience where eight guest teams became actual pit crew and challenged each other for the fastest pit stop time.

I think my posture that night was superbly horrible (I shall blame it on the virus which made me weak lol) but it was indeed flattering to see my pic up along with famous girls i.e. Dawn Yang and Chantelle Chuah :)
Posted by eRiCa at 4:50 PM

Email ThisBlogThis!Share to TwitterShare to FacebookShare to Pinterest
Labels: events

J: i'm not even close to being a socialite's assistant haha