Looks like the team has finally arrived at Mystery Venue A! *phew* 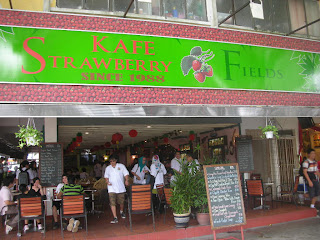 Team Boom Boom Pau (the so-called demi-gods of Greek) has finally at our first destination of The Maxis Om Nom Nom Race which is at Kafe Strawberry Fields, Petaling Jaya branch. The team is served teppan yaki chikien rice, asam fish rice, sago gula Melaka... much needed after the frustration of Donn screwing up Yong Hsin and Shi En for their lousy location-finding skills. Erica knows how to keep her cool though. On top of that, Donn almost lost a leg bcoz Yong Hsin reversed the damn car into his sneakers. =.=! 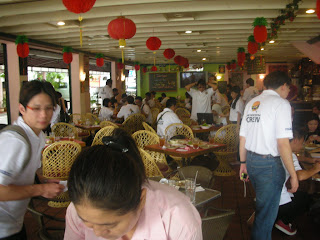 We arrived at the first destination around 11.30a.m plus, much to our excitement. 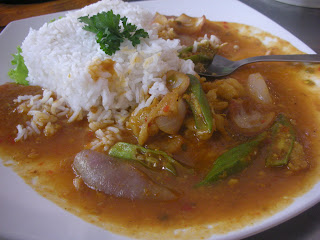 Asam Fish Rice – the dish is plentiful with lady’s finger, and a generous amount of mildly spicy and sweet asam sauce. The fish is delicate and nicely cooked, and the sauce compliments the texture of the fish. We love how the rice is served... squary, like SpongeBob SquarePants. Would recommend this awesome this to those who loves a twist on their regular fish dishes. 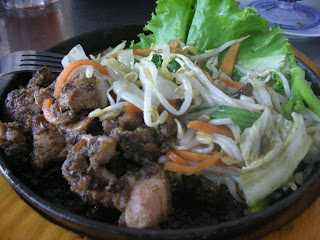 Tepanyaki Chicken Rice – Comes with a hearty helping of succulent chicken, and some fried bean sprouts. This was by far our personal favourite!! Chicken is like... so tender, with a slight kick of teppanyaki and black pepper seasoning. Tauge was quite crunchy, not like most of the soggy tauges we eat at other restaurants. 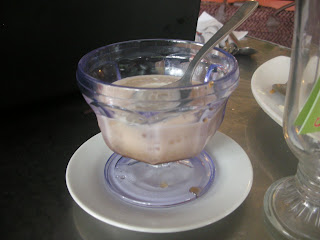 Sago Gula Melaka – The three Melaka boys agreed that the ‘gula Melaka’ that they use for this dessert is as authentic as it gets. The sago seats were really soft, and the mixture of the santan and gula Melaka reminds Donn, Yong Hsin, and Shi En of... thie hometown Melaka’s cendol! Absolutely simple, rustic, and a nice finishing to our first meal for the day! HELL YEAH!! Om nom nom! 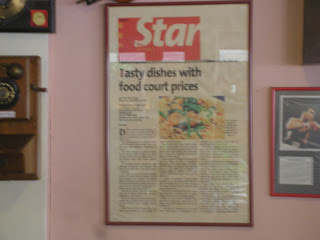 Next stop baby!! Where do we go now?

The rest of the team:

Useful blog website, keep me personally through searching it, I am seriously interested to find out another recommendation of it.