Of YeeSang, Partying and Baccarat

I'm supposed to be sleeping but here I am .. staring at my computer screen. Blank.

I had hardly 8 hours of sleep the past two nights. Thursday night - Was out at Straits Quay till 4 am, which resulted to me cancelling on Ivan on our breakfast appointment so he rescheduled it to the next morning.

The following night I was out at Mois with people I met in KL and also a few of my primary school friends but surprisingly I managed to wake up at 8.55 am and went on with my breakfast plan.
Zombie mode whole day, swore to myself to rest early but I slept at 1 am and was forced to get up at 4.30 am to leave for KL.

Phew. At least we beat the jam. TimChew was stuck on the road for 8 freaking hours HAHAHA.

All the above are my late night activities. I was busy collecting angpaus, and stuffing myself with all the good yet sinful food during the day. 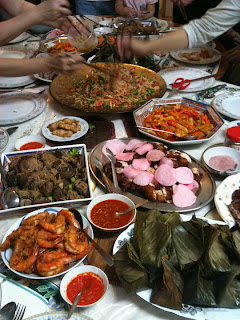 I'm serious. No kidding. LoL!! One dude copied me and went "Lou! Lou! Lou! Rich woman, rich woman!", and was asked to be a gigolo cause rich woman are mostly tai-tais HAHAHA.

I think I lou-ed YeeSang like 4 times this year. My little wish better be true since I lou-ed so much :P

And I also played a bit of Baccarat after giving in to an hour of persuasion. Managed to win back after losing in the first few rounds, thanks to such hands a couple of times :P 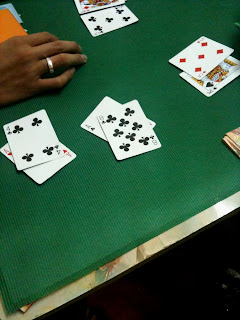 I quit after a while. Didn't dare take the risk of losing my hard-earned money.

That basically summarize my CNY 2011. Nothing interesting to shout about. How was yours? Managed to get extra pocket money? Angpaus not included :P

I miss my smelly towel already sigh.
Posted by eRiCa at 5:03 PM

I had a uber HOT new year....and it doesn't help the angpows are getting fewer :'(