There were so many promising movie trailers lately that Alex and I didn't know which to go for on a lazy Monday afternoon so the first thing we did was to rottentomatoes.com ALL of them - Chronicle, The Grey, Haywire and Man on a Ledge.

Chronicle ranked the highest among the four, rated 84% fresh while The Grey, Haywire and Man on a Ledge were rated 77%, 80% and 32% respectively. Man on a Ledge was declared rotten on rottentomatoes.com but the movie trailer looks really good so it's on my Must Watch list ;)

Man on a Ledge Official Trailer

We decided on either Chronicle or Haywire, and the final call was on Haywire due to its availability and timing.

It was a big, big mistake.

This dynamic action-thriller directed by Steven Soderbergh boasts a talented cast that includes Channing Tatum, Ewan McGregor, Michael Fassbender, Antonio Banderas, Bill Paxton, Michael Douglas, Michael Angarano; and introduces MMA superstar Gina Carano as Mallory Kane, in a demanding lead role that has her performing her own high-adrenaline stunts. Mallory Kane is a highly trained operative who works for a government security contractor in the dirtiest, most dangerous corners of the world. After successfully freeing a Chinese journalist held hostage, she is double crossed and left for dead by someone close to her in her own agency. Suddenly the target of skilled assassins who know her every move, Mallory must find the truth in order to stay alive. -- (C) Relativity Media


My verdict? Please don't waste your money and time on this. Seriously, Haywire came off as a senseless, confusing movie with messed up plot and aimless casts running about kicking each other's butt. Come to think of it, the movie title totally described the entire plot. 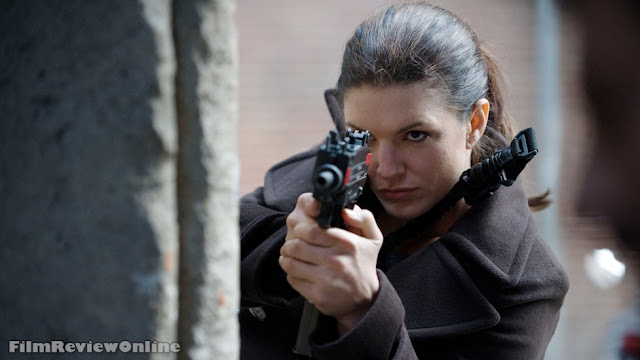 Don't let this snapshot fool you.

The trailer gave me a relatively good impression of it being an interesting action-packed film with a tough nut actress doing her thing, just like what Kate Beckinsale did in Underworld: The Awakening, but no, Gina Carano (lead actress in Haywire) couldn't act for nuts. Her facial expressions were limited as hell, and her lines were delivered very forcefully. Worse, the fight scenes were absolutely fake and amateurish I almost fell asleep during one of them.

While I enjoyed Underworld: The Awakening, rottentomatoes.com rated it rotten but Haywire was rated fresh when I was suffering for 90 minutes, in silence.

Email ThisBlogThis!Share to TwitterShare to FacebookShare to Pinterest
Labels: Movies

Unfortunately I have to agree. I really wanted this to be a cool movie, mostly because it featured a blue Evo just like mine!!! But even the car chase scene was incredibly disappointing with a stupid buck jumping through the rear window of the car!? What the hell was that?

I quit relying on movie critics because it usually ends up, the more pretentious and annoying a movie is, the better it's rating. If a movie is just "fun" it's rated poorly.

Haywire gets 1 star out of 5 from me.