I have two things to say.

One. I’m going to Perhentian!! 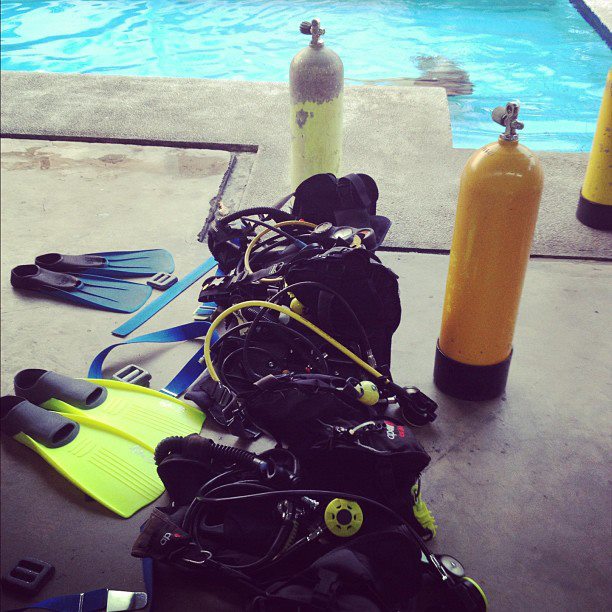 Wounds on my wrist, forearm, shoulder and knee; please heal fast enough otherwise I’d have to scout for a mighty waterproof bandage to withstand that huge amount of pressure 30 feet below sea level. Don’t even know if exists wtf.

You know, I thought I’d have to miss the open water course when this snatch theft happened on 6/6, but I have committed and paid! I lost my Burberry purse and my iPhone4s to that scumbag and I really don’t want to make my finances worse, so die die also must go and get the license!

I was so busy (and traumatized) I haven’t had the time to get all my important documents done. If not for my passport, people might think I’m from China, out and about to hunt rich men. Or Filipino, since I have a darker skin tone wtf.

#random
I witnessed a stranger’s bimbotic moment today. I was walking towards KLCC when I spotted a pretty girl nearby. I checked her out (girls check each other out it’s a norm) and I almost died laughing at the next thing I saw: She was on Face Time (on iPhone), with the back of her phone facing her hahahahahahhaha. A second later, she quickly flipped it around I think the person she was face-timing pointed out the blunder hahahahahahhahahaha omgg

So mean right me hahahahahhahaha.

A Victim of a Snatch Theft at Broad Daylight

Just a couple of weeks back, a young lady almost got herself abducted / possible rape by two men at The Curve. It was on a Sunday, at 5.22 pm.

She was a friend's friend's girlfriend. I was shocked, because at that very same day and time, I was driving towards Bandar Utama, with the intention to get a new backpack at either The Curve or at One Utama. I went to One Utama instead.

She shared her experience and advice on Facebook (read it here), and I took the initiative to share it on my Facebook Page to spread the awareness. 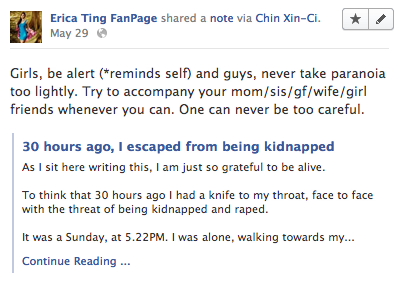 And yesterday, I was a victim of a snatch theft at broad daylight.

It was a working day and I wasn't well (lesson learnt: detox tea and durians do not go well together) so I had to call in sick. At about noon, I wanted to get lunch and go to the clinic.

My car was parked right outside the gate. I did a precaution check - Looked right, left, front and back.

It was really quiet. I looked around once more and walked towards the gate. It was padlocked. I took about half a minute to unlock it and the next thing I heard was a loud tyre screech and quick heavy footsteps towards me.

I turned around and saw a small-built, young Malay pighead dude coming for me with both his hands up. The first thing that came to my mind was, OMG HE'S GONNA STRANGLE ME!

He reached for my bag instead (thank God) and I was caught off-guard. I screamed and stepped back, into the compound of my house and he rushed into the house as well wtf!!

He tugged my bag so hard and seriously, that didn't help. The harder he pulled, the harder it was for me to release it. At that point of time, I knew I was in danger. I knew I had to let my bag go and I intended to but it got tangled and stuck onto my shoulder. He gave one hard tug and I fell onto the pavement.

My phone (white iPhone4s), car keys and house keys flung out of the bag. My Burberry purse, however, stayed put. He grabbed my bag, stopped to pick my phone up and left with an accomplice in an orange Kancil.

I was in shock. At first I thought he had my car keys with him cause I couldn't find it. I panicked, thinking they would turn back to drive my car off (and kidnap me or something) so I cried and screamed for help.

I was sobbing real hard.

My neighbours were very helpful, and I was very grateful for that. An elderly man came out with a stick (and found my car keys on the driveway), a lady got a young Malay guy to scout around the neighbourhood (in hopes to spot that orange Kancil I guess) and the elderly man's wife brought me in get my wounds cleaned up. 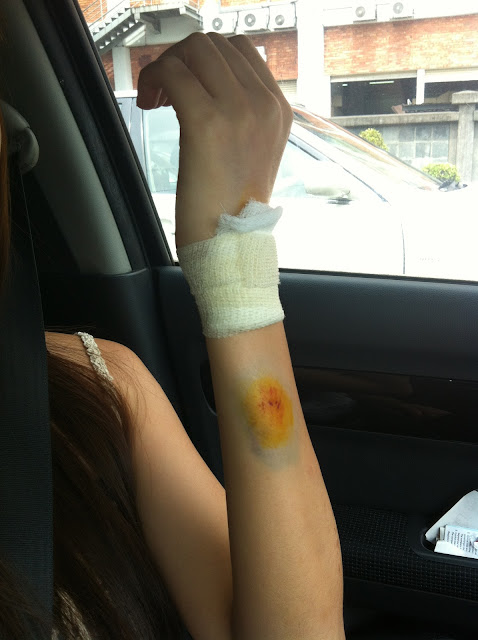 This was part of the injuries I suffered from the snatch theft. I had a really deep gash on my wrist. It's bandaged now .. didn't want to gore you guys with the visuals of it :|

And a really deep gash on my left knee as well, so now I'm walking with a limp. Other injuries includes deep scratches on my right knee, left foot, left elbow and left shoulder. I have bruises everywhere, and muscle pain at my left back and left abdomen.

And let's not forget the trauma.


Everything happened too fast for me to even look at the number plate.

Even after the horrifying incident at The Curve, I never thought it would happen to me because I was constantly on-guard, especially while walking to and from the LRT station .. but it happened all the same.

I am now afraid to walk alone cause even if I was extra vigilant, I won't be able to outrun a guy if he were to come after me *touchwood

Yes, I have became that paranoid.

I decided to share my ordeal to spread the awareness that, all the stories you read in the news, are very real and that it could happen anytime and anywhere. I was on the lookout. I did everything I could to keep myself safe but that wasn't enough. And up until yesterday, I had the mindset that it would not happen to me. I was proven very wrong.

So girls and guys, please be really careful when you're out. Girls, try not to be alone, regardless where you are. This happened right outside my house. In fact, that scumbag was right in my house compound wtf.

P/S: On a lighter note, if I could turn back time, I would tell the guy to just chill la stop tugging so I can release my bag without getting hurt.

Posted by eRiCa at 5:56 PM 2 comments: Links to this post