Okay as mentioned (and promised) on my Facebook page, I am giving away exclusive invites to The Wicked Festival 2013, happening this 23 November!! *throws confetti 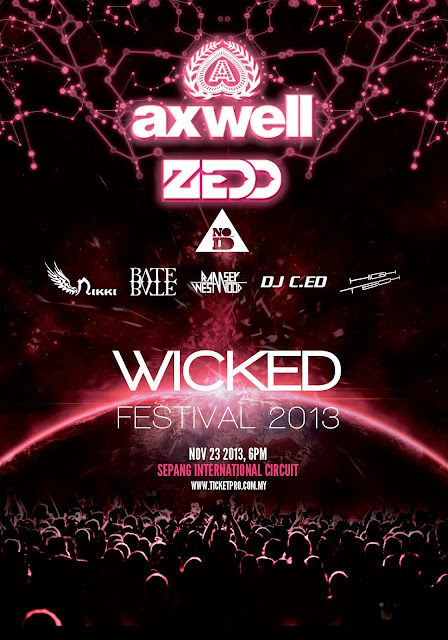 In case some of you wondered what's the hype all about, guess what - Axwell, the King from Swedish House Mafia pilots the crew!!

.. AND for the very first time in East Asia, Zedd will hit our stage and shed us some clarity. The magnitude of talents will melt your brains as No_ID from Amsterdam takes the stage along with DJ Nikki, BATE, Hightech, Ramsey Westwood and Captain Ed. The punches will come, blow after blow, one after another, all in a single night. Again, this is not for the faint-hearted. 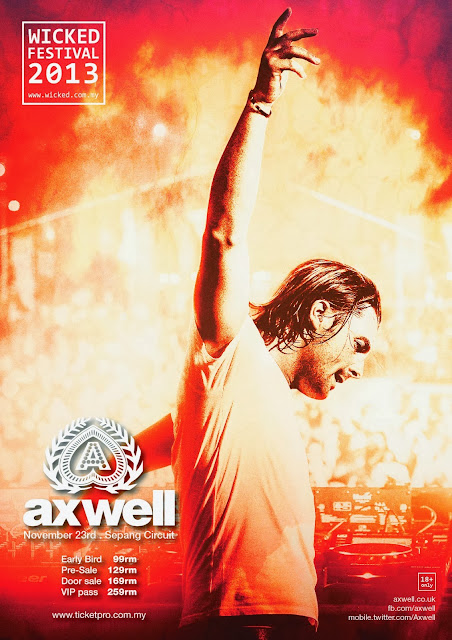 The Swedish House Mafia was first heard in 2007, in the Main Room at Cream Amnesia. Comprising of himself, Axwell, Sebastian Ingrosso and Steve Angello, the enigmatic trio decided to put their talents together to give birth to music that would stun the world and revolutionize the entire EDM industry. Very quickly after, it was chanted by hordes in the millions, echoing from all corners of the world.

He is none other than the best EDM artiste in the world, Axwell. And he will be here, at The Wicked Festival 2013! 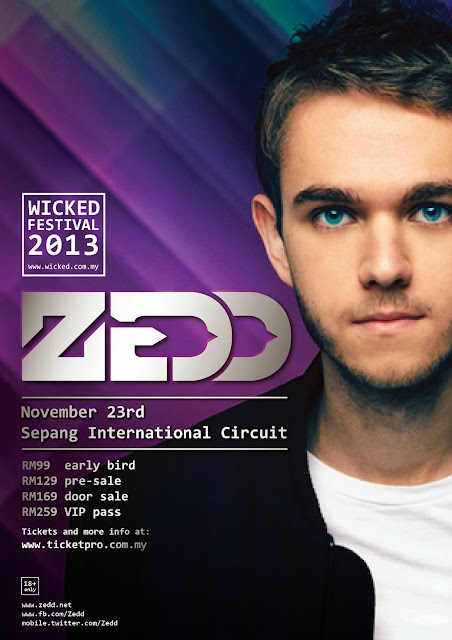 In 2009, Skrillex discovered a young prodigy whose music embodies the evolution in Electronic Dance Music and signed him into his label, OWSLA, Zedd was his name. Along the way he has produced tracks for the likes of Lady Gaga, Black Eyed Peas, P. Diddy, Swedish House Mafia, and was also awarded Billboard #1 dance track of 2012. Today, his performance mesmerize millions in mega festivals like Tomorrowland, Stereosonic, Lollapalooza, Ultra and many more.

Some of you may not recognize him by name, but I'm pretty sure his hit song 'Clarity' would ring a bell!

So, where else can something so wicked be, if not at the Sepang International Circuit!

So mark your calendars as the year draws to an end. November 23, Sepang International Circuit, or check out www.wicked.com.my for more info!

The tickets are now ready for purchase!

1. Go to my Facebook page (and like it, of course!)
2. In less than 20 words, tell me why do you deserve those passes. POST THIS ON MY FACEBOOK PAGE. Only those will be considered and judged.
3. Be as creative as possible, and get your friends to like your post too!
4. Judging is based on your creativity as well as the number of likes! Each winner will walk away with a pair of either the VIP passes or the regular ones.